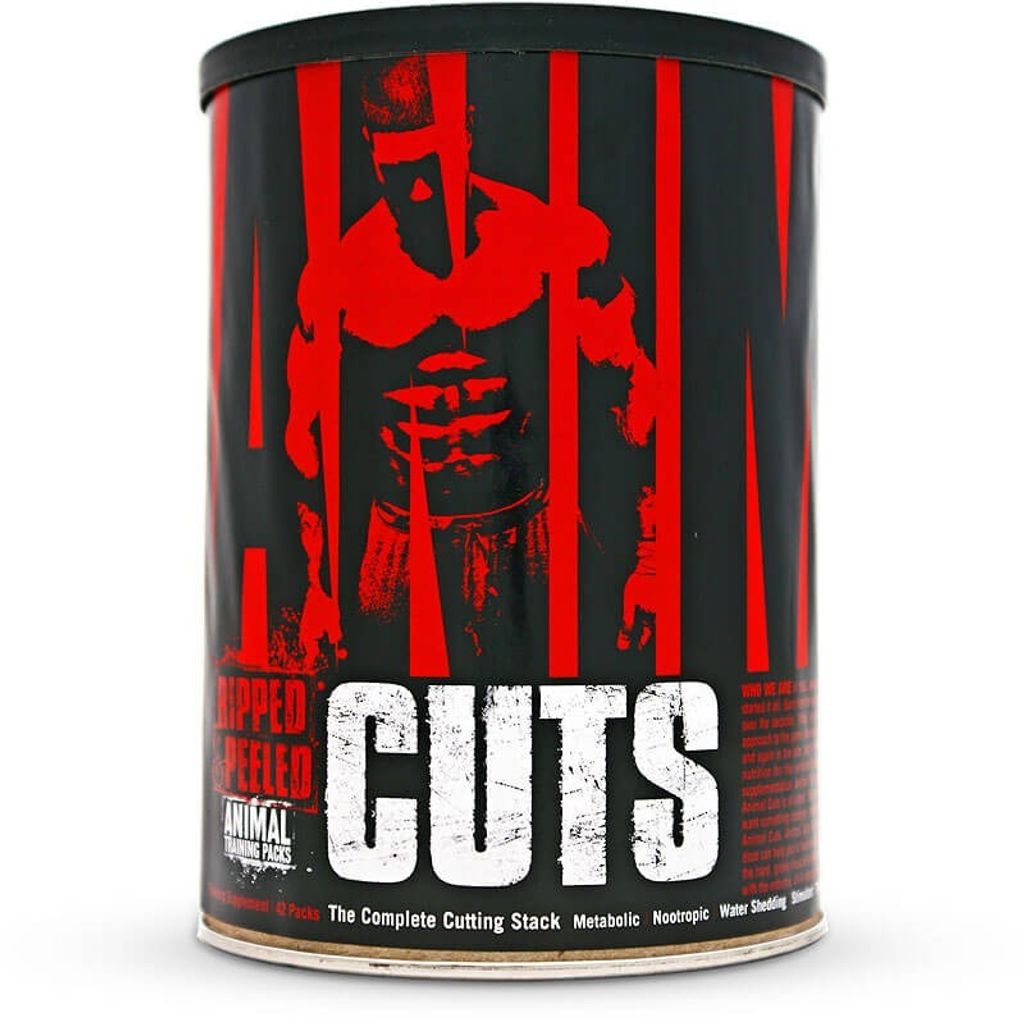 Animal Pak Animal Cuts Complete Cutting Stacks is designed specifically with the needs of advanced bodybuilders in mind, Cuts was formulated to produce dramatic changes in an athlete’s physique in a brief period of time. To get ripped, shredded, peeled… That was what the Cuts user demanded and that is precisely what they got. That was then and this is now, and though so much has changed, some things always remain the same. Where the supplement advancements of 2009 meet the original Animal ethos, you’ll find the brand new formula of Animal Cuts. With Animal Cuts you get an all-inclusive product. Think of it as one-stop-shopping, everything-you-need-in-a-single-pack. Just pop a pack and right down the hatch. It ain't your conventional fat burner. Unlike most conventional fat burner. Unlike most conventional "fat burners", Animal Cuts is more than just a thermogenic. It's a powerful formula designed to target fat loss from multiple angles. Each convenient pack delivers over 40 active ingredients. Every day, for 21 consecutive days, you'll get nearly 8,500mg of pure fat shredding power to kick start your cutting goals.

Research clearly showed that RK prevented the onset of obesity in mice even when the animals were on a high-fat diet. RK also prevented an increase in blood triglyceride following a high-fat meal. When rats were overfed fructose, a simple sugar linked to the current obesity epidemic, RK prevented fat synthesis. RK appears to fight off fat storage. RK's fat loss effects come from their ability to enhance norepineprine-induced fat loss by promoting the relocation of HSL from the cytosol of cells directly to fat deposits.

RK prevents and improves obesity with its main mechanism of action being its effects in altering the lipid metabolism through increasing norepinephrine-induced lipolysis.

You want cuts? You want that grainy, etched look? Then you need something to take care of both the fat and the water. When you need to look dry and hard, there's only one Animal Cuts.

Animal Cuts. Since nearly a decade ago when Schak wiped his mighty brow in the iconic “Cardio Sucks” ad, the most hard of the hardcore have depended on Animal Cuts when being lean alone simply wouldn’t suffice. The earliest of editions to the Animal line, Cuts did for your typical fat burners what Pak once did for multivitamins—rendered all others obsolete.

The new Cuts formula is advanced and complete, including ingredients designed to stimulate metabolism and thermogenesis, training focus and diuresis, muscle preservation and thyroid function as well as providing added energy and suppressing appetite. In this way the Cuts formula is everything the dieting iron athlete needs, totally comprehensive--the supplement bottom line when it comes to displaying the hard muscularity you seek. It is up to you to supply the desire, to stay on your diet and eat clean, to bring it in the gym and on the treadmill. You put in the hard work and Cuts will take care of the rest.

Though it seems impossible to top the results reported by the legions of Cuts loyalists over the years; those that have long regarded Animal Cuts as their secret weapon in the fight against bodyfat, that was exactly the intent from the get-go for the brothers behind the scenes at Animal. It was a tough task, but tough is the only way Animal knows. The higher our standards, the better our products, the more legit your results. Cuz at the end of the day, just like us, results are all you care about anyway.

With Animal Cuts you get an all-inclusive product. Think of it as one-stop-shopping, everything-you-need-in-a-single-pack. Talk about convenience. You don't have to think about anything, just pop a pack and right down the hatch. It ain’t your conventional fat burner. This new Animal Cuts formula maintains the spirit of the old—comprehensive and complete fat shredding power, just taken up to the next level. Unlike most conventional “fat burners” out there, Animal Cuts is more than just a thermogenic. It is a complete and comprehensive fat shredding formula that targets fat loss from multiple angles. Each convenient pack now delivers over 40 active ingredients. Every day, for 21 consecutive days, you’ll get nearly 8,500 milligrams of pure fat shredding power to kick start your cutting goals.

As a thermogenic, Animal Cuts is extremely powerful. Thermogenesis is the "burning" of calories from stored bodyfat. This in turn increases body temperature and provide a source of utilizable energy to the body. Animal Cuts includes potent thermogenics.  You get pure caffeine anhydrous, methylxanthine-rich herbs—kola nut, guarana, yerba mate, as well as raspberry ketones, coleus forskohlii and evodiamine. The ingredients in the thermogenic complex help boost the body’s natural ability to burn stored body fat via thermogenesis and even better, Animal Cuts is lean mass-sparing. On a side note, the new Cuts has a special. Like its brothers, Animal Pump and Animal M-Stak, you can now easily remove the thermogenic complex. Just remove the single red capsule. You'd be surprised how often we got this question in the past... 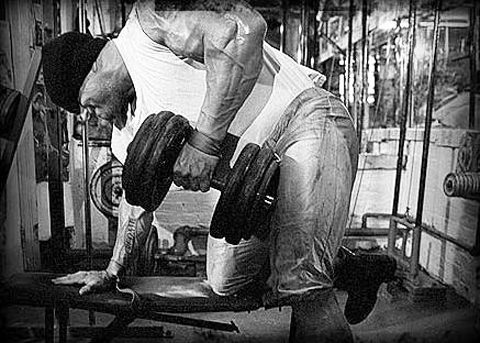 From a metabolic point of view, Animal Cuts, is stacked with only the most potent tea extracts. From green tea extract to oolong tea extract to white tea extract to black tea extract, it’s all covered here. These concentrated tea extracts have all been standardized for their potent polyphenol content, including EGCG as well as various other powerful catechins that work synergistically to raise your body’s core metabolism. An increase in core metabolism means an increase in the rate at which your body converts food that is eaten into energy. In short, a faster metabolism equates to less food being stored as bodyfat. Coffee bean extract is also added for its potent polypehol, content which includes the metabolic boosters—caffeic and chlorogenic acid. Such factors can be the difference in giving your metabolism the kickstart it needs to begin really processing bodyfat.

When it comes to shedding excess water weight, the kind that gives your body a soft, puffy look, Animal Cuts is extremely efficient. With 800mg of active ingredients including dandelion root (taraxacum) and uva ursi (arbutin, methyarbutin), hydrangea root, celery seed and juniper berry. Animal Cuts works alongside the thermogenics and metabolic boosters to give you a completely shredded, razor-sharp look. The problem synthetic diuretics is that they often deplete the body of key electrolytes, including potassium. When this happens, your muscles lose their pump and size. The diuretic complex in Animal Cuts contains potassium-sparing herbs, thus allowing you to preserve muscular fullness. For whatever reason, if you need or want to remove the diuretic complex, just remove the two blue capsules. How sweet is that?

Dieting can also increase the release of the unwanted stress hormone, cortisol in the body. High levels of cortisol can wreck havoc on natural hormone production and eat away at lean muscle tissue. This is the opposite of what hard training athletes and bodybuilders desire, especially when the body is already in a depleted state from reduced caloric intake. Animal Cuts has a specialized cortisol-inhibiting complex which is designed to decrease cortisol production, allowing your body to stay in a more positive anabolic environment, ideal for lean mass preservation while your fat is getting shredded.

Finally, three additional components round out Animal Cuts potent formula. The first of these is a nootropic complex which contains important brain boosting ingredients like DMAE, beta-phenylethylamine and bacopa monniera. They are purported to work to maintain proper brain chemistry and also allow for better focus and increased alertness during the workout. Another benefit of nootropics is increased oxygen supply to the brain and the increase of neurotransmitter output and neuromuscular performance.

The second of Animal Cut’s final components are CCK Boosters, aka appetite suppressors. Animal Cuts contains herbs like joboba seed and cha-de-bugre which are known to help cut down on sugar and carb cravings, something that every dieting bodybuilding experiences to one degree cone contest prep time. It is clearly easier to keep it clean when the munchies are held at bay.

Animal Cuts is then rounded out by a special bioavailability complex. Ingredients like the patented Bioperine™, ginger root, 6,7-Dihydroxybergamottin, as well as a few citrus bioflavonoid extracts work to ensure that you get the all of the potent fat shredding components of Animal Cuts into your system at a proficient rate. Cuz with ingredients like the new Cuts formula, you don’t want to miss a milligram.

Ripped, shredded, peeled… You know the deal. When it comes to really getting lean, when contest shape is in your sights, look to Animal Cuts. The strict dieting, calorie-crunching, ball-busting battles with the weights and beating up the treadmill for miles a day are the necessary evils of attaining the condition you so desire and that, well, that simply can’t be bought in a can. But if you have the balls to step up and are willing to pay your dues, like always, we’ve got your back. Animal meets your hunger half way with the all-new, more powerful, reformulated Animal Cuts, designed to be the difference maker. Cuts is the final element between just being jacked and being Animal—between merely being defined and being ripped, being shredded, being peeled.

Not for use by those under the age of 18. Consult a physician before using this product. If you have, or have a family history of, heart disease, thyroid disease, liver disease, kidney disease, diabetes, high blood pressure, recurrent headaches, depression or other psychiatric conditions, glaucoma, difficulty in urinating, prostate enlargement, seizure disorder, if you are using a monoamine oxidase inhibitor (MAOI), anti-depressants, or any other medication, dietary supplement, prescription drug or over-the-counter drug consult with a physician. Discontinue use two weeks prior to surgery. Do not use if pregnant or nursing. Do not exceed recommended dose. Contains caffeine. Do not use in combination with other caffeinated products.