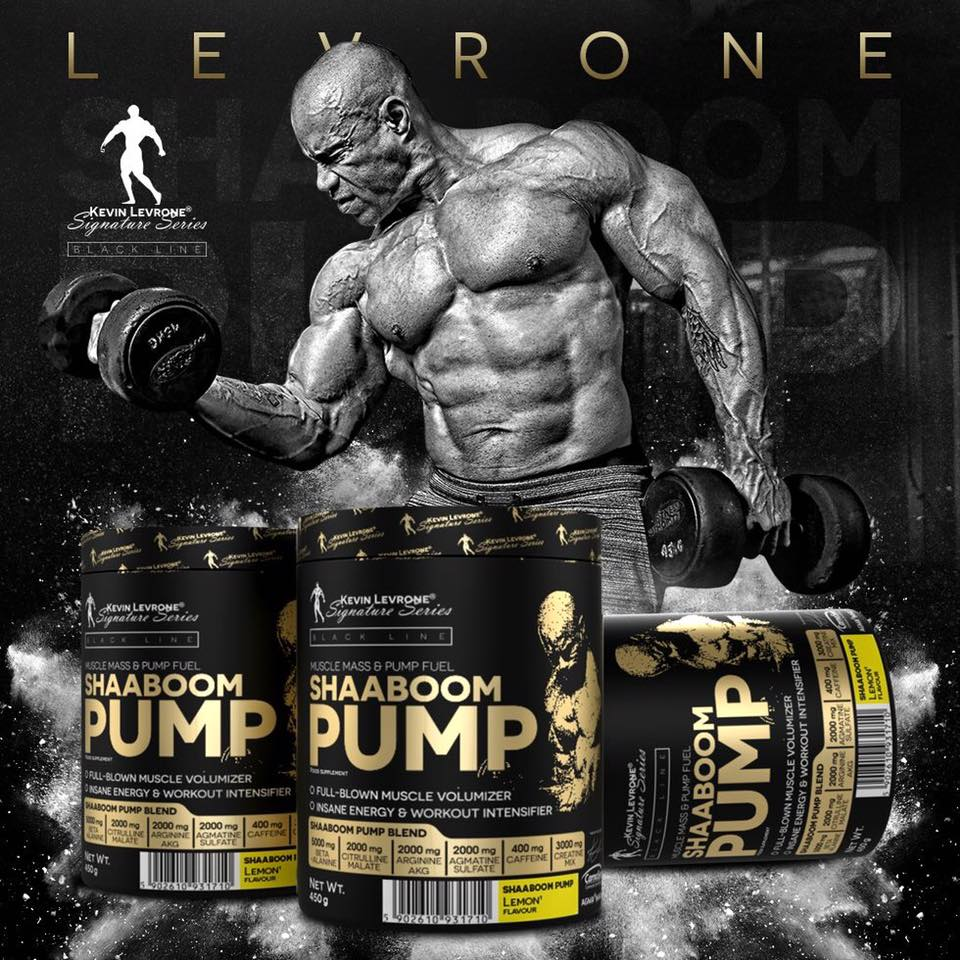 SHAABOOM PUMP was created for one simple reason: to produce animalistic energy and superhuman skin-stretching muscular pumps during each and every workout. There is nothing quite like the feeling of an amazing workout when your muscles suddenly start to engorge with blood, and you look like you’re wearing a kids t-shirt, as veins start protruding like a road map. It’s moments like this when you wish you could just bole up the feeling. Mission Accomplished!

SHAABOOM PUMP is the full-blown muscle volumizer and hyper-active energy booster, that will simply never let you down. It’s a proven formula that has become the trusted companion of bodybuilding champions and workout maniacs throughout the world.

The SHAABOOM PUMP formula is enriched with 5000 mg of beta-alanine & 2000 mg of Citrulline Malate. From the very ﬁrst serving, you’ll be prepped for imminent iron bale, as the intensity creeps in and the weights suddenly feel like building block toys. The Anti-Lactic Acid Assault – Experience No-boundaries & No-interference from Lactic acid attempting to hold you back! SHAABOOM PUMP’s 3 forms of Creatine monohydrate, Tri-creatine Malate & Creatine HCl work tirelessly to regenerate ATP stores to keep your energy cranking and your engine fuelled to take your workouts to a whole new level.

SHAABOOM PUMP opens the nitric oxide ﬂoodgates and promotes a non-stop surge of anabolic ingredients like Agmatine Sulfate & AKG to help maximize your intra-workout muscle hypertrophy and post-workout recovery. We’ve added a subtle dose of caffeine, to further boost intensity and laser-focus throughout your workout.

SHAABOOM PUMP provides everything you’ve been searching for to ferociously attack your workouts and build your own legendary physique. 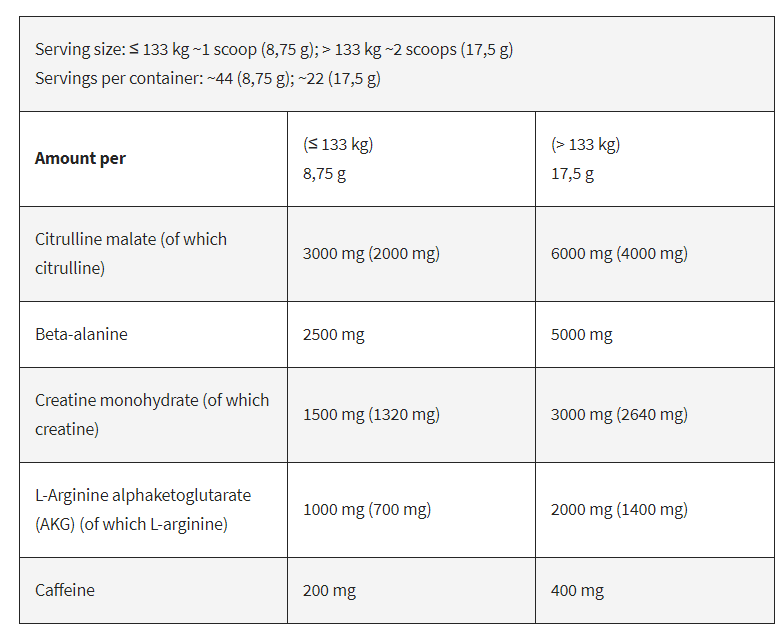 Beta-alanine as CarnoSyn® is a patented beta-alanine molecule. The amino acids occur naturally in the form of alfa-amino acids. Beta-alanine is one of the exceptions. In the beta-alanine molecule, the nitrogenous group is not bound to the same carbon atom as the carboxyl group, as it usually occurs in alfa amino acids, but it is positioned one atom away. Beta-alanine plays an essential role in the regulation of the amount of the carnosine, a substance which neutralizes the amount of lactic acid produced in muscles during a high-intensity workout. Beta-alanine is an intracellular buffer capable of buffering the hydrogen ions (stabilizing the pH of the muscles) whereas the said lactic acid is the hydrogen ion donor.

The hydrogen ions block the further performance of skeletal muscles by impairing the communication between the nervous system and muscle tissue, which results in the breakdown of the process of effective muscle contraction. The beta-alanine has a very long active half-time, which lasts about 40 days. Thus, its capability of concentration in muscles depends not only on the amount but also on the duration of supplementation. According to the research, the supplementation of beta-alanine for 10 weeks increases the concentration of carnosine in muscles up to 80%. What does it mean for an athlete? Increasing the carnosine concentration in type II muscle fibres (FTA, FTb – fibres prone to muscle growth) with the use of CarnoSyn® supplementation, improves the capacity of the muscle fibres to absorb an increased number of H+ hydrogen ions produced as the result of the lactic acid formation, thus, providing a balanced pH level.

CITRULLINE MALATE
It is a compound which is a combination of citrulline amino acid and malic acid. Citrulline is an amino acid increasing the physical efficiency of the body by its multidirectional effect. Citrulline, as an amino acid participating in the urea cycle of the body, is involved in the process of metabolising ammonia to urea, and, at the same time, converting the toxic ammonia into water-soluble and easy to remove urea. This cycle of reactions and the presence of citrulline is, at the same time, essential for anyone staying on a high protein diet, as it prevents from protein toxicity. Another advantage of the presence of citrulline in the body is the fact that it boosts cellular metabolism and energy level and increases the endurance level, as citrulline is involved in the production of nitric oxide.

Citrulline and arginine are amino acids which may be mutually converted in the organism. Whereas the conversion of citrulline to arginine requires numerous reactions, the conversion of arginine to citrulline takes place in a direct conversion which results in the formation of the nitric oxide molecule. The nitric oxide present in the muscles promotes the relaxation of the endothelium of blood vessels which results in increasing of blood flow to the working muscles and supplying oxygen and numerous nutrients necessary to continue the increased effort.

The increased blood flow supports the process of “cleansing” of the working muscles. A specific exchange of oxygen and nutrients for carbon dioxide and the harmful products of metabolism, which must be removed by the organism, takes place in every cell. Due to the increased blood flow, the exchange is faster and thus, the muscle cells can work longer and harder.

L-ARGININE ALPHA-KETOGLUTARATE
A-AKG molecule is derived from L-arginine and α-ketoglutaric acid – one of the intermediates in the Krebs cycle – a metabolic pathway leading to produce an energy substrate for working muscles – adenosine triphosphate (ATP) molecule. Arginine is known by sports enthusiasts as a molecule which triggers the “muscle pump” – inseparably related to the production and release of nitric oxide molecules in the body. Nitric oxide is an important cellular signalising molecule involved in many physiological and pathogenic processes. It is a powerful vasodilator boosting the endothelium relaxation which results in widening the diameter of all blood vessels, mainly arteries.

A wider artery may carry more blood and nutrients to the working muscles. The arterial blood contains oxygen necessary for the muscle work and supplies nutrients such as amino acids, saccharides, creatine and arginine from outside. Nitric oxide makes the transport within the body more efficient, and thus the cells receive nutrients but also the harmful metabolic products are more quickly removed from the cells.

AGMATINE SULFATE
Agmatine is a byproduct of Arginine that is produced through a process called decarboxylation. It is basically Arginine with the carboxylic acid end removed. Arginine does have many benefits to both the bodybuilder as well as person seeking general health improvement. Arginine is well documented for its ability to support endogenous production of creatine, stimulation of protein synthesis, insulin sensitivity through attenuation of blood glucose, GH production, and its role in the urea cycle to aid in the removal of nitrogenous waste. Agmatine is likely the one molecule to take part in more metabolic processing than Arginine. There are nineteen well-accepted mechanisms of action suggested in the literature and at least thirteen have direct benefits to the bodybuilder and/or health enthusiast with even more effects being discovered literally on a daily basis!

In literature, Agmatine is described as a pain fighter and has an antioxidant role. This can be beneficial to the athlete in two ways (it can potentiate the effects of analgesics used during recuperation from injury and it has the potential to aid post-workout recovery). Agmatine can offer protection from the undesired effects that free radicals can have on the body. Some studies indicated that Agmatine enhances insulin production leading to better insulin response. This allows for positive effects of attaining body composition goals. Other studies show that agmatine acts in the body on various hypothalamic and pituitary peptide hormones such as LH and GH.

These will have subsequent effects on other hormones like IGF-1. Agmatine modulates nitric oxide (NO) in different ways. It stimulates some types of nitric oxide synthase (NOS) while inhibiting others. This is essential to the proper functioning of the polyamine biosynthetic pathways. It can acts on catecholamine (Epinephrine > Norepinephrine > Dopamine) release. These endogenous compounds are part of nearly every action in the body. Most notably for the athlete is the role that this compound would ultimately have in both energy production and aiding anticipation of the stress afforded by competition.

CREATINE MONOHYDRATE
Creatine monohydrate, which is one of the best-known diet supplements for sportsmen all over the world with scientifically proved effects. In physiological conditions the human body produces creatine by itself from 3 amino acids: arginine, glycine and methionine which is further transformed into phosphocreatine which, in turn, is responsible for producing ATP, the quickest accessible source of energy for intensively working muscles.

TRICREATINE MALATE
Tricreatine malate is a compound formed by the combination of 3 particles of creatine with 1 particle of malic acid. In natural conditions creatine, malate has better solubility in water than monohydrate, and it also shows higher chemical stability, due to which it is more resistant to the acid environment of the digestive tract. Furthermore, the malic acid present in the tri creatine malate takes part in the transformation of the carboxyl acids in the body, in the Krebs cycle leading to the formation of ATP, that is the energetic substrate for working muscles.

CREATINE HYDROCHLORIDE
This is a form of creatine stabilized by hydrochloride. By means of such combination, the scientists have obtained a creatine particle which has a better water solubility than the creatine monohydrate, which allows for better ingestion of the particle in the organism. Additionally, creatine hydrochloride is characterized with stability in any environment: acid, neutral and alkaline. A stable creatine particle does not need any buffering substances in order to go through the digestive tract, where the environment is changing from the acid in the stomach to the alkaline one in the duodenum.

Creatine hydrochloride does not cause flatulence which accompanies supplementation, e.g.: with creatine monohydrate, and it does not require a so-called loading phase. The satiation of the cell plasma with HCI creatine takes place unusually quickly due to its high bioavailability. Creatine hydrochloride improves physical efficiency in the cycle of successive, short, very intensive physical exercises.

CAFFEINE
Caffeine is a central nervous system stimulant. It produces increased focus and reduces fatigue1, boosts the circulation and respiratory system by expanding bronchi and it facilitates breathing. It reduces muscle pain resulting from high-intensity physical effort. It upgrades the thermal economy of the body and the rate of metabolism, supports fat burning processes, stimulates the use of fat as an energy source, improves the body efficiency and endurance1, reduces the risk of diabetes and liver diseases and reduces the blood glucose level

Direction Usage
Depending on your body mass mix 1 scoop (8,75 g) with 150 – 200 ml of water or mix 2 scoops (17,5 g) with 300 – 400 ml of water. Drink 1 serving size about 20 minutes before your workout.
Warnings: For healthy adults only. Do not use if you are allergic to any of the product compounds. Do not exceed the recommended daily dose. Do not exceed a dose of 400 mg of caffeine per day from all sources. Food supplements should not be used as a substitute for a varied and balanced diet. A varied and balanced diet and a healthy lifestyle are recommended. Do not use if pregnant or nursing. Keep out of reach of young children. Do not consume with alcohol.

Store in a dry place, at room temperature (15-25°C). Protect against the light. Do not freeze.
The measure included in the packet serves to facilitate portioning, but it does not guarantee precise dosing. It is advisable to use scales in order to measure out the exact amount.
If you take medications, you should consult your doctor before you consume the product.