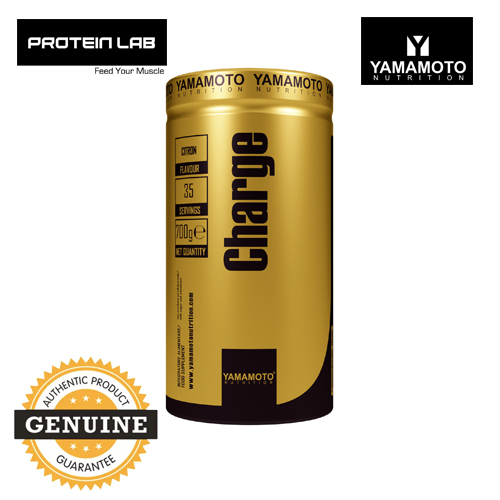 Yamamoto Nutrition Charge is a powder food supplement for healthy adults for use after intense and prolonged workouts which cause muscle fatigue & reduce glycogen in the muscles. The key ingredient of CHARGE is isomaltulose, a carbohydrate metabolism by the human body, & a source of glucose & fructose. After very intense and/or prolonged workouts, with muscle fatigue & depletion of glycogen stores in the skeletal muscles, carbohydrates contribute to the recovery of normal muscle function.
After the great success obtained by the now "Famous" highly branched cyclodextrins (HBCD), the dynamic product catalogue of the Yamamoto stable continues to insert new elements, among them another particular form of carbohydrate: the isomaltulose (Palatinose) presented by us as "CHARGE". Isomaltulose is a disaccharide formed from glucose& fructose which is present in nature, albeit in rather low concentrations, in honey & in sugar cane syrup, & its production is done through modern enzymatic conversion techniques starting from sucrose. Isomaltulose is often compared (and replaced) to sucrose not only for its highly sweetening power (45-50% of that of sucrose) & development linked to its flavour, so much so that it is often used in the food industry. Just like sucrose, it is totally digested at the intestinal level, even if its digestion takes place slower. A structural characteristic characterised by the fact that the bonds of the molecules that form the isomaltulose (alpha (a) -1, 6-glycosidic) are more stable than the bonds of the molecules present in the sucrose. So this is an interesting point & much appreciated for the sportsman who wants to maintain optimal performance levels, the glycemia & insulin increase being significantly lower than other sugars. This particular type of bond existing between these two components (fructose & glucose) is such as to slow down the speed of absorption. Then our intestinal disaccharidases, which are the enzymes capable of breaking the molecular link between the two disaccharide-forming sugars, such as, for example, sucrose. As a result, blood sugar & insulin levels will have a significantly lower increase & will still be very gradual. This has brought out the advantages that have made it already well known in the world of sports integration in particular for endurance sports such as athletics, cycling, triathlon, cross-country, skiing, etc, or the fact that it has a low glycemic index & a reduced osmolarity compared to glucose & fructose which were used a lot in the past. The split glucose enters the blood more times than the use of other sugars, with stimulation to the lower insulin release. Isomaltulose has a glycemic index similar to fructose but compared to it, has the advantage of lesser "impact" on the hepatic production of triglycerides and therefore is more suitable than fructose, or "historical" mixtures used by athletes with fructose, glucose or maltodextrin as a low glycemic carbohydrate. Less glycemic and insulin oscillations and less gastrointestinal disturbances. In fact, with isomaltulose, the risk of gastrointestinal disorders is reduced even further after its intake, and scientific studies have shown that isomaltulose is able to provide energy for a longer time without the risk of incurring the so-called glycemic "crash" (declines). Therefore, once ingested by the athlete, it is gradually absorbed and follows the same metabolic processes as sucrose, the sugars freed from its hydrolysis being the same as those resulting from the hydrolysis of sucrose (glucose and fructose). The digestion process is particularly "easy" for the gastrointestinal tract, also with very good tolerability emerging from the studies, without presenting particular problems of the gastrointestinal type typical of other forms of carbohydrate used in sports (e.g. swelling, fermentation also type cramping, nausea, diarrhoea) or allergic reactions. Noteworthy of being presented in its favour compared to its more famous "relatives" and also partially appreciated by the food industry (glucose, maltodextrin, fructose or sucrose itself) is the fact that although it provides an energy contribution equal to 4 Kcal /g, unlike sucrose, it does not favour the onset of caries because it cannot be used by the micro-organisms responsible for their appearance.  From a "metabolic" point of view, it has emerged that from some comparative studies, by using palatinose instead of higher glycemic index disaccharides the body oxidises fewer carbohydrates and more fatty acids thus saving the carbohydrate reserves. A really interesting performance support weapon for many types of sports! Thanks to the slowness of its absorption process, essentially assuming Charge widens the temporal extension of the glycemic curve, it makes the isomaltulose a slow-release energy source. This can support the body during training sessions even of very prolonged and sustained intensity, with no drop in performance due to glycemia that fluctuates or annoying gastrointestinal disturbances, having in its favour sustained scientific literature as well as positive concrete evidence from athletes in the field. It is a white and crystalline powder, it is not hygroscopic so it is well discernible, does not form clots, and mixes very well in beverages with other elements such as mineral salts, branched or essential amino acids for example.
CHARGE can be taken both before and during training for endurance sports in particular or in any case those that go beyond a certain length of time, presenting itself as a newer and more effective alternative to the most common sources of simple carbohydrates or mixtures used in the past based on glucose, fructose, sucrose and/or maltodextrins. 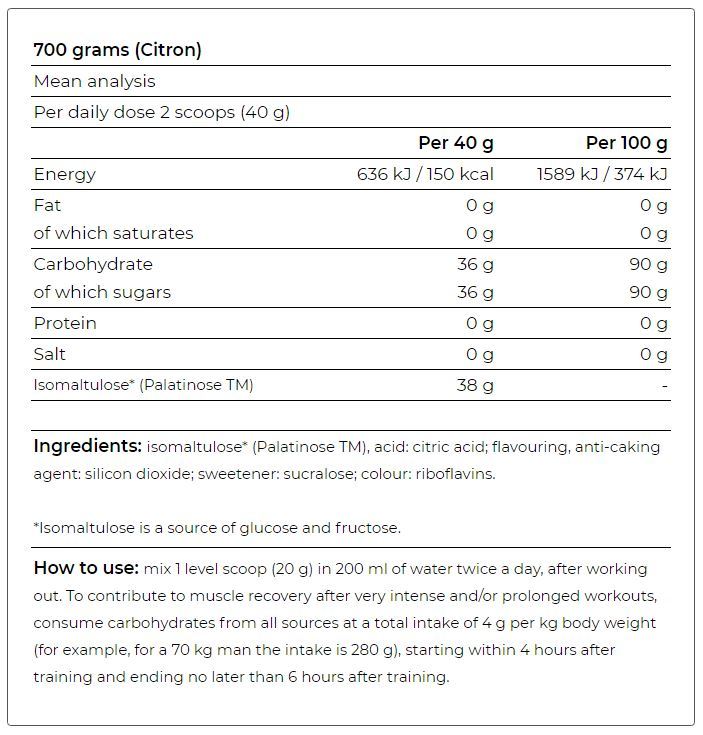